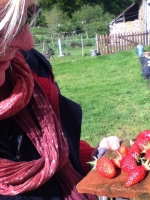 A misspent youth followed by uncontrollabe wanderlust and the gift of the gab had me gainfully (and not so) employed in a catalogue of careers in numerous locations – graphic designer, cook, wire sculptor, busker, club promoter and on it went.

In the late 90’s I returned to London, finally deciding to knock the autodidacts chip off of my shoulder once and for all. I got a place at London University, but fate it seems, had other ideas. During summer break I went to play at the wedding of some friends in the French Alps, there I set eyes on an intriguing french boy who made beautiful sculptures and things, as they say, have never been the same since.

International love affairs sound terribly romantic – and don’t get me wrong, the passionate
reunions and endearing epistles were not to be knocked – but after a year of backwards and forwarding we both knew that our future lay together, and not in a city. So I packed what could be squeezed into a tiny Renault 5, gave away the rest and hightailed it to france with not much of a backward glance.

We had a plan, find a little farmhouse in the middle of nowhere and make it up from there. And that is pretty much what we did. Three months later we moved into Pontpierre, a falling down farmhouse with about an acre of land in the lost bocage of Mayenne – guardians of a 28 acre lake paying a peppercorn rent.

Nearly three years ago some exceptionally good fortune gave us the opportunity to buy a place of our own. By the time of our first visit to Thibois we had looked at an awful lot of property and nearly made offers on a couple, but none had come close to being so very right – Une evidence as the o.h. would say…
We had outgrown our garden and the goat herd was expanding – we wanted more land and that’s what we got – 10 acres of woodland, pastures and buildings abandoned to the will of nature and feeling the pain…Brambles and blocked drainage, brambles and leaking roofs, brambles and nettles and bindweed, rusty, rotton fencing and did I mention the brambles ?

We had big plans for the house when we first arrived and we’re not much further along now than a new roof and plumbing – but hey, who needs an indoors when there is so much out ?

I think we’d just started to feel like we were getting a grip when we met Hal and her boys last summer ( and a good job too as there have been times when she might have taken one quick look and run screaming back to central heating!) There is never nothing to do around here and making space for new people can be a grind, but this lot just slotted right in – bounding with humour and smarts, energy and enthusiasm – it has been with a huge amount of pleasure that we began gardening together, then making music, launching rafts, drinking wine, making food – you know, making friends…

I think I see this blog as a natural extension to this friendship – The pleasure gleaned sharing our really quite poor but terribly rich lives.

2 thoughts on “About Mandy @Thibois”